I still remember the day I saw you, you were wearing a neatly tucked blue shirt, trousers & a smile which I can never forget in my life. I was nervous & you were so confident. But you made me so comfortable, and all my insecurities vanished.

Being my boss, you were training me for my job & we started spending so much time together, I never realised when that work conversations turned into friendly chatter & we became friends. The fun part was when we started acting to be in a relationship just to tease our colleagues as they had been spreading gossip about us.

And one day, Sanir proposed to me & instead of saying yes, all I could say was to ask him to ask my parents for my hand in marriage, because it’s my father’s decision. I believe in the good old ways.

After changing his job, when Sanir knew he could prove to my father that he was capable enough to marry me, he finally asked my father. My father agreed readily but my mother was not in favor of our marriage. Somehow after some persistence, she agreed. 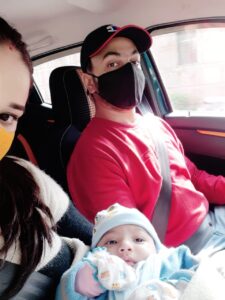 Recently, we completed 3 years of marriage & welcomed our little boy this year.

The best thing about our relationship is that Sanir is very supportive, he respects my work & the most important is that he respects me for who I am.